First thing first: get a map of the campus!!!! I would even recommend that you buy a smartphone just to get the application specially made to find your way around this huge town. 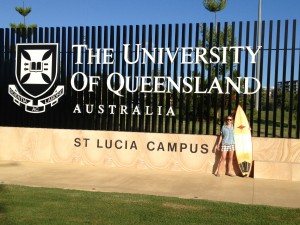 In effect, UQ St Lucia is a village with buildings full of classrooms, a food court, restaurants of all specialties and many cafés. As a town it also offers community services such as a medical center, amazing sport amenities, a post office, banks and ATMs. Most of all it is settled in a beautiful environment allowing students to have a lunch or study on the grass by the lake side.

It is also a city made for the students of many disciplines as you will see with the number of libraries. This multiplicity in knowledge is something we don’t experience in HEC but that is really appreciable and motivating. For example, once, as I was walking from a class to another and passed by an inflatable pool full of sand. In it, there was a small customized electric car making noises. The guy smiling next to the pool told me it was a university project, a vehicle capable of finding buried bombs in deserts. He built it with other students: an engineer, a chemist, a mechanic, a nanotechnologist and even someone studying photography. It was really inspiring to witness the cooperation between all the faculties.

Another appreciable feature is the common use of communication technologies. On “Blackboard” you‘ll find all the resources you need for each course you are enrolled in. That is to say the teacher’s power-points, exams’ dates and results and a forum where you can talk with other students. The big bonus when comparing to “zone-cours” is the record of each lecture. In effect, most of the lectures are recorded and you can download the two hours film right after each class. This liberty allows students to go through lectures when it is convenient and to organize time for travels! However, a little advice, go to the first lecture as rules change with each teacher. You may also have to attend the tutorials (one hour, not filmed), which are in small group. 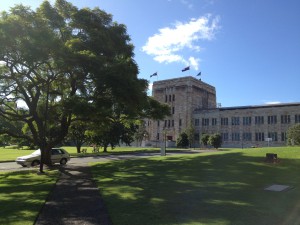 Concerning the content of the courses, my favorite was “Economy of public issues ECON1120” as an equivalent of  « PPE ». It was a really interesting course even if it asked a fair share of work. I took the other three courses in the hospitality program. In general, the necessary amount of study to furnish is lower than in HEC. Yet, I felt that the exams were more difficult because they weren’t based on what we saw in class, which was only theory, but on what we could do with such knowledge in practice.